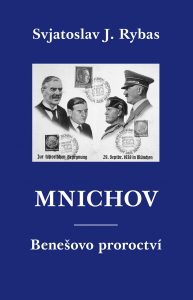 Presentation of the book “Munich. The prophecy of Benes”, published in the Czech language of the Russian writer and Director of the Research Center of the elite and geopolitics took place in the European House in Prague.

It is written with the support of the Ministry of Foreign Affairs of Russia and the Russian embassies in the Czech Republic and Slovakia. The book is devoted to the events of 1938, the so-called Munich conspiracy, the first victim of which was Czechoslovakia.
Presenting the book and the author, the deputy of the European Parliament Jiří Mashtalka stressed that what happened in Munich has great significance for modern Europe, Russia and the whole world.
“It’s the right book,” he said. – “It is important for understanding the history of Czechoslovakia and for an impartial assessment of modernity”.
Svyatoslav Rybas noted that he worked, based on documents of Russian archives and memoirs of leading political figures. The main actors are President of Czechoslovakia Edward Beneš, who performs his feat in the conditions of total state defeat, as well as other world leaders of that time: Churchill, Stalin, Roosevelt, Chamberlain, Hitler, diplomats, generals, scouts, military personnel.
The reader will learn how the head of a small European state, being in a hopeless situation, is the winner. President Edward Beneš owns the foreign policy formula of Czechoslovakia – 50% to the West, 50% to the East – thanks to which the independence and integrity of the country was restored.
“The Munich conspiracy was the trigger for the outbreak of World War II,” Svyatoslav Ryas told Izvestia. – Western democracies blessed Hitler for further expansion. The book is written in the form of a literary script and is accompanied by a large number of archival materials. The first edition of the book was published in the Czech language, because we want to convey our Russian point of view on these events and show that at first there was Munich, and then the Molotov-Ribbentrop Pact, for the 80th anniversary of which we will surely be charged with the fact that The USSR supported Hitler. But no one supported him – in Munich, the Soviet delegation was suspended from negotiations.
Professor Oscar Kreichi, author of the study “Geopolitics of Central Europe. A View from Bratislava and Prague “, praising the book, remarked that modern politicians, unfortunately, practically do not read historical works.
Emotional coloring of the presentation of the book by Sviatoslav Rybas was given to the songs of the Czech poet Karel Gasler, who died in a Nazi concentration camp. They were performed by the chairman of the Association of Czech Rusists Jiri Klapka. Actor Jiří Brož has read several excerpts from the book, which tell of the heroism of the Czech patriots.
Svyatoslav Rybas noted that, based on the works of “Munich. Benes Prophecy “it is planned to create a television series with the involvement of Russian and European cinematographers. In Russian, the book will be published in the publishing house “Young Guard” at the end of April this year.