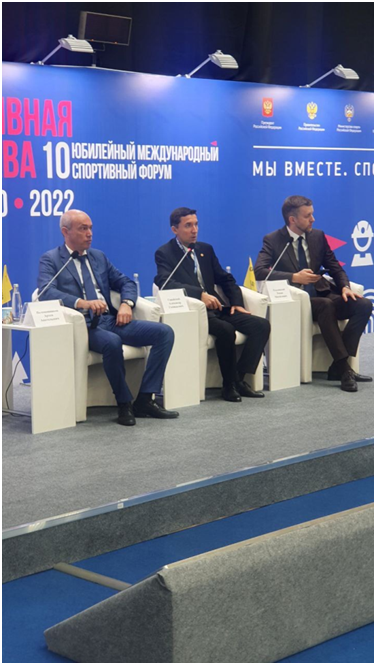 On September 29, 2022, within the framework of the International Sports Forum “Russia – a Sports Power” in Kemerovo, an international round table was held on the topic “Mind games as a tool for the formation of an intellectual elite”.

The purpose of the event is to draw the attention of the general public of the BRICS countries (representatives of public authorities, the business community, civil society, scientists and cultural workers) to the issue of the need to develop a systematic approach in the educational process for teaching children, youth, students, adults, people with disabilities opportunities for intellectual games that form skills that contribute to systemic adaptation in a rapidly changing social environment.

The main topics of the round table:

– the influence of intellectual games on the formation of the worldview and the construction of life strategies of children and adolescents from kindergarten to professional sports;

– prospects for the implementation of international educational, cultural and educational and sports projects on intellectual games;

– intellectual games as a tool of public diplomacy.

Fabiana Bentes – Chairman of the sports organization Sou do Esporte (“I am from sports”) (Rio de Janeiro, Brazil);

Silakovsky Maxim Yuryevich – Deputy President of the Federation of Taurels of Russia for sports work;

Polomoshnov Artem Anatolyevich – President of the Chess Federation of the Altai Territory;

Nesterov Vladimir Gennadievich – Chairman of the St. Petersburg branch of the Federation of Chinese Xiangqi Chess;

Savich Gleb Alexandrovich – Chairman of the Kemerovo branch of the Russian Federation Go.

As part of the round table, a presentation of the Russian intellectual and sports game “Fatum” took place.

As a result of the speeches, recommendations were prepared for the federal government bodies of Russia on the following decisions: to include in the curriculum of the basic general education “Weekly hour of intellectual games”; develop standards for teaching intellectual games and approve them; to develop a passport of the specialty “trainer-teacher in mind games” and approve it; to conduct an active information campaign in Moscow and the constituent entities of Russia that regular training in intellectual sports games contribute to the mental development of children and youth; to create on television and radio stations children’s and adult programs to popularize intellectual games, to cover them in print and electronic media.