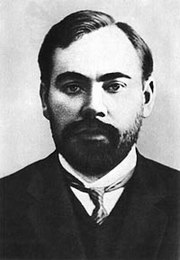 He was called the “Red Hamlet”, the “heretic of Marxism” … He was considered the vice-leader of the Bolsheviks. He was even recognized as “the great vizier of the Bolshevik power”. Far ahead of the idea of a systematic approach, which was made by the Austrian biologist L. Bertalanffy. He died, having put on himself an experiment on blood transfusion. And all this is about one man – A.A. Bogdanov, a Russian scientist-encyclopedist, revolutionary figure, doctor, thinker, writer and one of the greatest ideologists of socialism.

In April 2018 was fulfilled 90 years from the date of his death. Life, creativity and contribution of A.A. Bogdanov on 23 April 2018 a joint scientific and practical seminar was dedicated of the IRIAS, Institute for Economic Strategies, Club of academician O.T. Bogomolov and the club “Analytics”. This seminar opened the project “Names of Management Science”.

The moderator of the scientific and practical seminar was A.I. Ageev, General director of the IRIAS. At the meeting, reports were made by:

Later on the official website of the Institute for Economic Strateges a transcript of the meeting will be published.